Investors learnt a few days ago that India's Spicejet, a low cost airline, is the world's best performing airline stock. 320% in just one year. Others Indian carriers like Indigo, Jet not very far behind. Amazing !!

Then IATA found out that India is likely to become the third largest aviation market in the world by 2026, according to a forecast made by the International Air Transport Association. (IATA)

As per an IATA statement, "China is likely to overtake the United States as the world's largest passenger market (in terms of traffic to, from and within) by 2029.  It will carry some 1.19 billion passengers, by that time.
UK would slip from its number 3 position.
Indonesia will reach the number 5 position in the world,"

IATA expects that India's air passenger traffic would grow up to 378 million passengers by 2034 with 275 new passengers likely to be added during 2014-34.

Presuming the base year as 2014, globally, the IATA estimates that the passenger numbers are expected to reach 7 billion by 2034 - a 3.8 per cent average annual growth in demand, which is more than double the 3.3 billion corresponding figure for 2014 and, exactly twice as many as the 3.5 billion flyers expected this year, IATA said in its forecast. 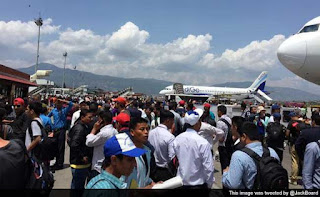 IATA estimates that the five fastest-increasing markets will be
A sizable gap has been built up between the performance of air passenger markets in the BRIC economies (Brazil, Russia, India and China). China and India are growing fast, with annual growth this year-to-date of 12.5% and 16.5% respectively.

In terms of routes, IATA estimates Asian, South American and African destinations will see the fastest growth, reflecting economic and demographic growth in those markets. The fastest growing routes will be
"The demand for air transport continues to grow. There is much work to be done to prepare for the 7 billion passengers expected to fly in 2034," said Tony Tyler, IATA's director general and CEO.

However, these forecasts for growth in air passenger numbers have been revised due to the softer global economy, and slower economic growth projections for China. Global economic and political events over the past year resulted in IATA cutting its long-term growth forecast for airline passenger numbers.

Nevertheless, passenger numbers are expected to grow by an average 3.4% a year between 2016 and 2034.

Global passenger numbers that are expected to reach 7 billion by 2034, more than double the 3.3 billion that flew in 2014, is actually down by 400 million on last year’s forecast citing negative developments in the global economy dampening the demand for air transport.

IATA’s CEO Tony Tyler, who will retire as IATA Director General and CEO in June 2016, emphasized that political climate can impact air travel figures to drop significantly. He highlighted such observations as -


IATA said the increase in passenger numbers over the next decade will be fueled by significant growth in Africa.

IATA research shows the five-fastest-increasing markets will be in Africa. The top 10 will be: Malawi, Rwanda, Sierra Leone, Central African Republic, Serbia, Tanzania, Uganda, Papua New Guinea, Ethiopia and Vietnam – each of these markets is expected to grow by 7-8 per cent each year on average.

Japan, Spain, Germany and France are expected to fall relative to their competitors, Italy falls out of the top 10, while Brazil moves from 10th place to 7th.
Email ThisBlogThis!Share to TwitterShare to FacebookShare to Pinterest
Home
Subscribe to: Posts (Atom)